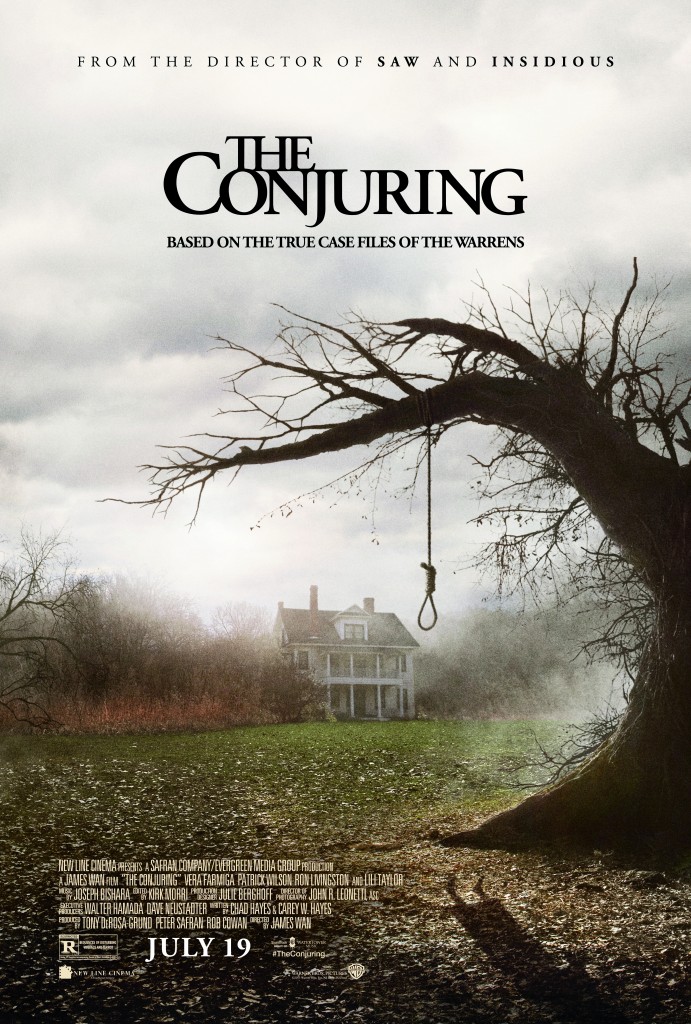 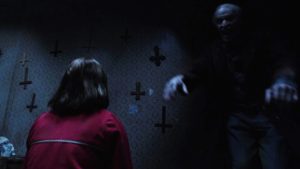 With The Conjuring 2 coming out this Friday here is a look back ten of the best supernatural horror movies. the list contains horror movies that have to do with possessions, ghosts, witches or other paranormal activity.

Also seeing that this is in the horror genre WARNING: Explicit Content 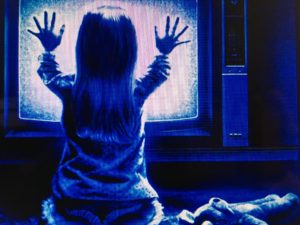 For the first entry in this list, Here is this 80s classic produced by Steven Spielberg and directed by Tobe Hooper.  It follows an average American family as they discover Ghosts through their television set.  Thought to be friendly at first, the ghosts turn dangerous real quick when the youngest daughter goes missing.  The family turns to a parapsychologist and an exorcist for help.

With it’s “They’re here” line, it is hard to believe that the director of E.T who be involved with a movie this scary.   Poltergeist scarred both audiences and critics alike; being named one of the best movies of it’s year with the possessed clown doll being a high light. 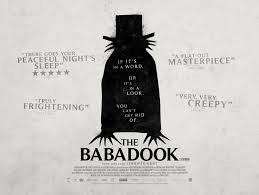 This 2014 surprise smash follows a single mother played by Essie Davis as she deals with the death of her husband and take care of her out of control son, who claims there’s a monster lurking in the house after reading a quick scary children’s book.  The mother soon realizes that her son might be telling the truth after all, after strange and sinister occurrences happen.

The Babadook makes great use of creepy imagery clearly inspired by German Expressionism style with an over stylized production design. The movie also makes good use of it’s monster by not showing too much of it as it lingers in the shadows. However The Babadook is not all style; as it is also an allegory for depression and how it can eat at someone.  The Monster acts as the depression as it takes over the family’s life. The Mother soon will need to take back control of her life. 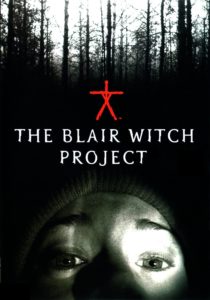 If there is a movie to blame for all the terrible found footage horror flick in recent years, look no further than The Blair Witch Project. The Blair Witch, was the catapulted the found footage sub genre as it scared the crap out of audiences everywhere. It follows three student filmmakers making a documentary about a so call “Blair Witch”, an urban myth in Burksville, Maryland. When the young filmmakers go on the search for The Blair Witch, they go missing and never are seen again.

What really grabbed people’s attention wasn’t so much the movie but the marketing. Led to make people believe it was real, the filmmakers (the real ones) created a whole back story with a fake website(Click Here) back when the internet was young.  With the backstory the movie creates a chilling atmosphere as it feels like campfire ghost story coming to life.  The Blair Witch Project created something truly innovating and none was able to recreate it. 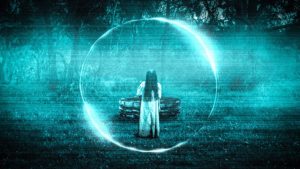 To continue the atmosphere over gore, here is The Ring. The Ring is the American remake of the Japanese horror, Ring. It follows a journalist Rachel Keller, who is investigating her niece’s death, which is rumored to be related to a cursed videotape that if someone watches they have seven days until they die.  Keller watches the tape and soon realizes that this is no rumor. With only a week to live, Keller must dive into this ghost story to figure away to survive, not only for her but also her young son, who has also watched the tape.

The ring creates a chilling atmosphere with disturbing imagery to keep any horror fan interested. Naomi Watts turns in a strong performance as Keller who is desperately trying to get to the bottom of this supernatural mystery. The Ring continues to creep out audiences everywhere. 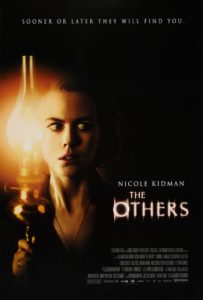 This underrated early 2000s thriller follows Nicole Kidman, who plays a stern but caring mother of sunlight sensitive children who the three of them live alone on a darkened island Manson. The arrival of three servants at the house — aging Mrs. Bertha Mills (Fionnula Flanagan), elderly gardener Edmund Tuttle (Eric Sykes), and a mute girl named Lydia  (Elaine Cassidy) — coincides with a number of odd events, and Grace begins to fear there are unknown others in the house.

One reason why The Others didn’t get enough attention is that possibly it was released right after The Sixth Sense, another spooky ghost horror/thriller. However this doesn’t stop The Others from becoming it’s own thing with a mystery that will keep audiences guessing.  If someone is looking for a creepy haunted house movie that goes beyond the norms of the genre this is perfect for them. 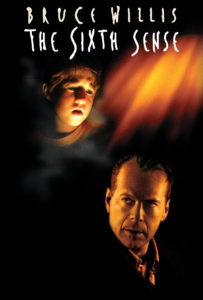 This is the movie that single handedly created the “Spoiler” culture. It stars Bruce Willis outside his usual tough guy act. Willis plays a therapist who is seeing a young boy who is able to see dead people. M. Night Shyamalan made his splash with The Sixth Sense that made everyone to think he was going to be the next Spielberg or Hitchcock.

When it comes to re-watching movies, The Sixth Sense is one of the best. Upon each viewing there is something new for film buffs. But that’s not the only thing that this movie has to offer, after all this this a horror list. There are plenty of scenes that will make skin crawl.  The Sixth Sense proves to be a stand out horror of it’s generation. 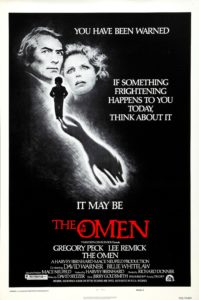 This classic horror is about a U.S Ambassador Robert Thorn, who adopts a baby and names him Damien from a hospital in Rome after he and his wife have a stillborn.  A couple of years later after they move to the United Kingdom strange deaths occur that seem to be related to Damien. Thorn starts to investigate and learns of the origins of his adopted son. Damien very well could be the son of Satan, the Antichrist.

The Omen proves to be a classic with it’s haunting visuals and gothic score. The two scenes that scared audiences the most have to be the nanny who cheerfully hung herself at Damien’s sixth birthday in front of all the guests and a photographer by David Warner gets his head decapitated by a sheet of glass. Forty years later The Omen a new generation of horror fans. 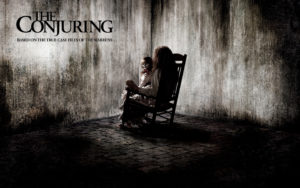 Although relatively new, this haunted house movie is able to hold it’s own against the heavy weights of horror.  James Wan, director of Insidious and creator of the Saw franchise really shows his craftsmanship as a filmmaker by creating great pacing with scares that left audiences jumping out of their seats.  It is obvious that Wan is a fan of classic horror movies from the 1970s with the overall atheistic of The Conjuring. Slow pans and smooth tracking shot make it seem like it’s from a different time.

The movie follows Ed and Lorraine Warren (real life paranormal investigators), played by Patrick Wilson and Vera Farmiga, as they investigate the Perron family. The Perron Family, with Lili Taylor and Ron Livingston playing the parents, has just moved into a secluded farmhouse where a supernatural presence has made itself known. One thing that this movie gets right is that the audience must care about the characters. With the well developed characters and the strong performances to match; it is hard not to fall in love with the two families in this frightening tale. 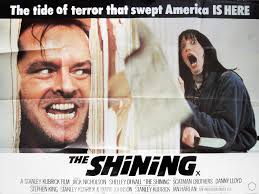 Legendary filmmaker Stanley Kubrick takes his turn at the horror genre with this 1980 classic based on a Steven King novel of the same name. It follows Jack Nicolson in one of his most famous and off the wall craziest performances. Nicolson plays Jack Torrance, a writer who becomes a caretaker for the isolated Overlook Hotel in Colorado to cure his writing block. Once he, his wife and his son, who has psychic premonitions arrive; dark secrets of the hotel’s history are revealed, Jack slips into madness. Is it just him scrumming to the isolation or is some more other worldly?

Kubrick’s masterful visual storytelling is evident with the use of steadicam. With tracking shots of the hallways and other areas of the hotel brings the haunting atmosphere to the next level. Combine this with Nicolson’s strong performance; this is one horror gem that stands above most. 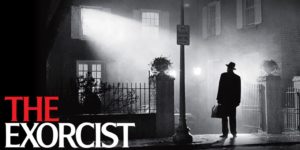 This was an obvious one.  No other movie on this list terrorized moviegoers quit like The Exorcist.  Loosely based on a true story, Regan a twelve-year-old girl (Linda Blair), starts showing strange behavior like speaking in tongue and levitating. After Regan’s mother (Ellen Burstyn) takes her in for tests, each one leads to dead ends.  Regan’s mother soon find out that her daughter might actually be possessed and her only hope lies with two Jesuits priest one who has lost his way after the death of his mother and a worldly exorcist who may or may not have had run ins with this specific demon before.

The Director, William Friedkin took drastic measures to get the performances he wanted. He stuck the actors in below freezing rooms and Linda Blair was injured in the harness they used when she was being thrashed around by the demon. Nevertheless, it did get results with the film being nominated for ten academy awards including Best Picture. The Exorcist took home two for Best Screenplay and Best Sound.

The Exorcist proves to be the leading contender in supernatural horror movies.

So do you agree or did we leave out a movie that terrified you? Comment below and let us know.